Is the Worst Behind Us??

It’s no secret that this has been a challenging year in many ways. Many of us are feeling the squeeze at the pump, in our electric bills, and at the cash registers. If the extra money spent at the supermarkets isn’t bad enough, anyone that has tried to buy a house or a car this year has been pummeled with interest rates not seen in decades, and short supply has made a new car purchase even more inconvenient than usual. To top it off, it’s the height of midterm election season and it’s been one awful political ad after another. When is it going to end??

For us at Paragon Wealth Management, it’s been especially frustrating. While we have been very active with portfolios this year trying to add value where we can, the stock market just doesn’t seem to want to cooperate. Even more frustrating, the bond market, which typically provides a cushion to investment portfolios, has been doing the opposite. In fact, this year may end up being the worst year ever for bonds (https://www.forbes.com/sites/qai/2022/09/22/is-this-the-worst-year-ever-for-bonds/?sh=7684e3e52b4f), which is hitting moderate and conservative investors the most.

Now that we have all the doom and gloom out of the way, let’s talk about some of the bright spots. Yes, markets are down:  as of this writing, the S&P 500 is down 24.7 percent, and the Bloomberg US Aggregate bond market is down 15.17 percent; however, we are entering the best historical quarter of the year for the stock market. The fourth quarter of the year has historically had the strongest seasonality, and that is especially true during midterm election years. As a matter of fact, since 1950, stocks have had a positive return one year after midterm elections every time, regardless of which party won the election:  yes – every time; also, yes – no matter which party won. Furthermore, the average return one year after midterms has been a whopping 14.7 percent (https://lplresearch.com/2022/10/05/midterm-year-seasonality-swings-favorable-for-stocks/). 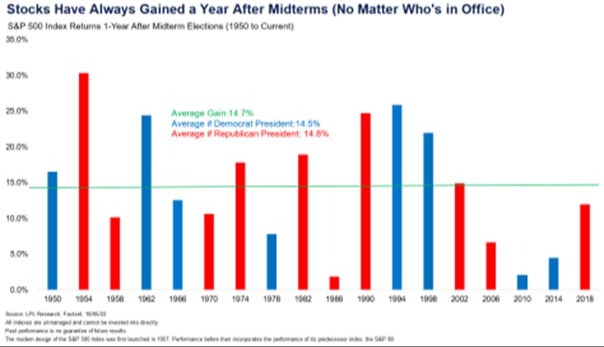 Aside from the above, the S&P 500 may actually be at a reasonable value for future returns, as the market hasn’t been at the valuations that they are now since 2014. The lower the value we can pick up good quality companies to invest in, the better the possibility of outsized future returns in the future.

Another beacon of hope is that leading indicators are pointing to inflation moderating, and in some instances even declining:  lumber, used car prices, and job openings, among others. It will take time for those indicators to spill over to the Consumer Price Index, one of the major indexes that the Federal Reserve looks at when deciding interest rates, but the point is that they are moving in the right direction. 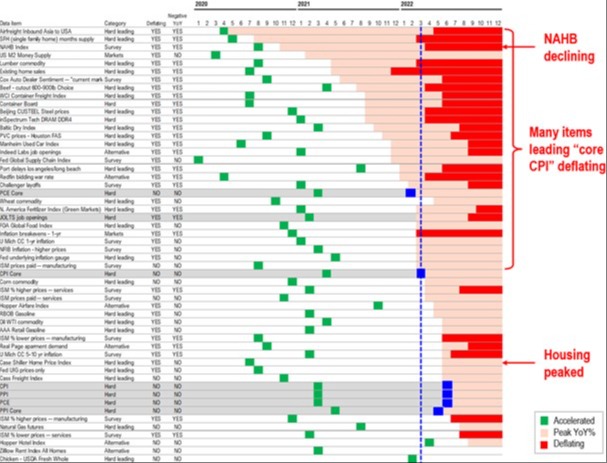 Finally, I’d like to point out that the reason the bond market has been so volatile this year is that bond interest rates have been rising abnormally quickly; and as painful as that has been to live through, at the end of the day, it means that interest rates are becoming attractive again. In December of last year, the 10-year treasury rate was well below 1.5 percent. That means that an investor that purchased a 10-year treasury bond would have been content receiving less than 1.5 percent per year for the following 10 years. Currently, a new 10-year treasury bond is paying a rate closer to 3.9 percent for 10 years. That’s a move in interest rates of epic proportions for the bond world, especially in this short of a time frame.

So what, you may ask? As a portfolio manager, it provides an opportunity to reallocate resources back to the bond markets; not only to bring some income back to portfolios, but also to take advantage of some profits in the event the bond market increases in value.

There’s been a great deal of work done to our portfolio models this year: the quality of companies invested has improved greatly to help soften the downsides, cash has been set aside on multiple occasions to profit on market rallies, and cash has been redeployed when conditions looked oversold in the market. Most recently we sold a great deal of international investments because we feel that U.S. stocks have a better opportunity for positive returns in the 4th quarter than international stocks. All of this is being said to state that we have been trying to add value where we can, given a very difficult market environment.

We believe we are in a very good position to take advantage of a potentially positive 4th quarter of the year, and we are cautiously optimistic that the 4th quarter will be an improvement from the previous three quarters this year. We can’t stop the markets from being volatile (as much as we keep trying), and we definitely can’t stop the constant bombardment of negative political ads, but we think that better days may be ahead.

As always, we try our best to reach out to each and every one of you on a regular basis, but if you have any immediate concerns, please don’t hesitate to reach out to us; we will be happy to sit with you and go into further detail.

The opinions voiced in this material are for general information only and are not intended to provide specific advice or recommendations for any individual. All investing involves risk including loss of principal. No strategy assures success or protects against loss.

The economic forecasts set forth in this material may not develop as predicted and there can be no guarantee that the strategies promoted will be successful.